All functions, decorators, and assertions provided by the framework are defined in codewars_test Python module.

The Python runner for versions prior to Python 3.8 does not contain the codewars_test module. The testing framework is imported implicitly and aliased as test and Test. This behavior is deprecated and for the Python 3.8 kata, the explicit import is required.

For simplicity, through the rest of this article it's assumed that the codewars_test module is imported and aliased as test with the following statement:

This is a convention used in many Python kata, but it's not a requirement, and authors can choose to import the module in any way they find suitable for them.

Tests in the Python testing framework are composed of functions decorated with a set of Python decorators. All such functions are automatically discovered and run. The final result for every test block is determined by contained assertions and reported along with its measured execution time.

Test decorators call the functions immediately, so it's safe to use them in a loop.

@test.it functions can contain only assertions, and cannot nest other test cases or test groups.

Every assertion generates a separate log entry in the test output.

Note that failed assertions do not stop the execution of the enclosing test case by default. See Failing Early on how to control this behavior.

The basic setup for the tests follows this example:

The above produces an output similar to the following: 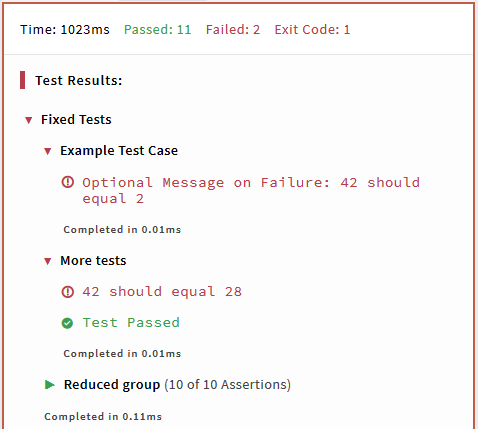 Most assertion functions can accept a named argument allow_raise=False.

If you change its value to True, the tests contained inside the current block will be interrupted at the first failed test. The execution goes back to the parent block if it exists and the next part is executed.

Checks that the actual value equals the expected value.

Note that because Python's equality operator checks for deep equality by default, you don't have to compare the contents of the array element by element yourself when you want to compare values as lists, tuples, sets, etc.

This function is usually the main building block of a Kata's test cases.

Checks that the actual value does not equal the (un)expected value. Default message is "\<actual> should not equal \<expected>".

Checks if the actual value is close enough to the expected one, with a default relative or absolute value of margin. The comparison is performed like this:

So you can compare either big or small floating-point values without problems.

Default message is "\<actual> should be close to \<expected> with absolute or relative margin of \<margin>".

Checks if the passed value is truthy. This function can be helpful when you test something which cannot be tested using other assertion functions.

However, since this function's default failure message is not very helpful, it's strongly advised to provide better, custom message.

Default message: "Value is not what was expected".

Simply generates a passed or a failed test with a message. If your test method is very complicated or you need a special procedure to test something, these functions are probably a good choice.

Checks whether invoked function throws an exception. Raised exception must be an instance of a type specified with exception argument.

The exception argument can specify a single type or a tuple of multiple exception types. The assertion is satisfied when the raised exception is an instance of at least one of the specified types.

Checks whether invoked function does not throw an exception of a type specified by exception.

The exception argument can specify a single type or tuple of multiple exception types. The assertion is satisfied when no exception is raised, or when the raised exception is not an instance of at least one of specified types. If during the execution of function an exception is raised that does not match the parameter exception, it is silenced and the test is considered passed.

Runs a function decorated with @test.timeout within the time limit.

sec is the amount of time allowed. It is expressed in seconds and can be given as an integer or float.
Generates a failed assertion when the function fails to complete in time, and its execution is terminated immediately.

The decorated function is required to not throw any exceptions. If an error is raised during its execution, the test is considered failed and the error message becomes "Should not throw any exceptions inside timeout: \<Exception()>". This requirement is enforced by wrapping the inner function with expect_no_error, and as a side effect, one extra "test passed" entry is emitted for a collection of tests run inside a timeout wrapper.

Timed tests should contain at least one assertion which verifies the result returned by the user solution. Otherwise, the test will be considered passed just if it happens to finish in time below the requested time limit, even if it would return an incorrect answer.

v2 to support grouping tests with decorators was contributed by @Bubbler-4.