This guide covers common problems you may run into as a newcomer solving kata on Codewars, outlining common mistakes and their typical solutions. We thought it would be useful to put a lot of the common questions we see in one place!

Your solution seems to work or is close to working, but still fails tests​

My solution works on my machine, but not on Codewars, OR My solution seems correct, but some tests fail when I attempt it.​

There are a number of things it could be. Try the following (in the given order):

When I run "Test", everything passes, but when I hit “Attempt” tests fail​

That is because your solution does not pass the tests. Remember that when you press “TEST”, only sample tests are run – the ones you see under the kata code editor. There’s usually only a couple of sample tests, they are easy, execute fast, and they do not cover too many edge cases. Only when you press “ATTEMPT”, the full test suite is run, potentially with tests for edge cases, large inputs, performance, random tests, etc. You cannot see the full test suite (and its test cases) if you haven’t solved the kata. Only when the full test suite is run and passes can your solution be accepted and the kata be considered solved. See this point for possible hints on how to proceed.

All tests except the last one pass​

For some kata (but not for all!), the test suite is built in such a way that tests are stopped on the first failure. When you see only one failed test and nothing after it, that might mean that it’s the first test which your solution failed and once you fix it, there are more to come.

When I print my answer it looks exactly the same as the expected output, yet tests fail​

There are a couple of possible reasons for such behavior:

All tests pass, but I get a timeout​

Sometimes users are confused when their solution is valid, passes all tests, test output panel is green, but they cannot submit the solution because tests time out. Such a situation means that solution does not pass all the tests. Most likely, the solution returns a valid answer and passes tests up to some point, but it's too slow and then gets forcibly aborted by the runner due to exceeded execution time. The solution needs to be improved and made more performant. Some hints can be found here.

Error messages and printing your input/output​

How can I see which input causes my solution to fail?​

Most, if not all, languages on Codewars support writing to standard output (stdout). You can use stdout functions of your language to print function arguments (or anything you like) and it will be visible in the test output panel.

Important note: remember that when tests are run, your solution is executed first (potentially with all the print statements inside), then assertions are performed on the returned value, and finally, green/red assertion messages are printed. This leads to the fact that whatever you print in your solution will appear above the assertion message it applies to. It's somewhat difficult to spot it visually in the Codewars test output panel. If you think that your output totally does not match the test case or its assertion message, be sure to look at the green/red message located below whatever you printed, and not above it. Additionally, some test suites are built in a way that the printed output and related assertion messages are separated visually from one from another, but such kata are rather exceptions and not that common. 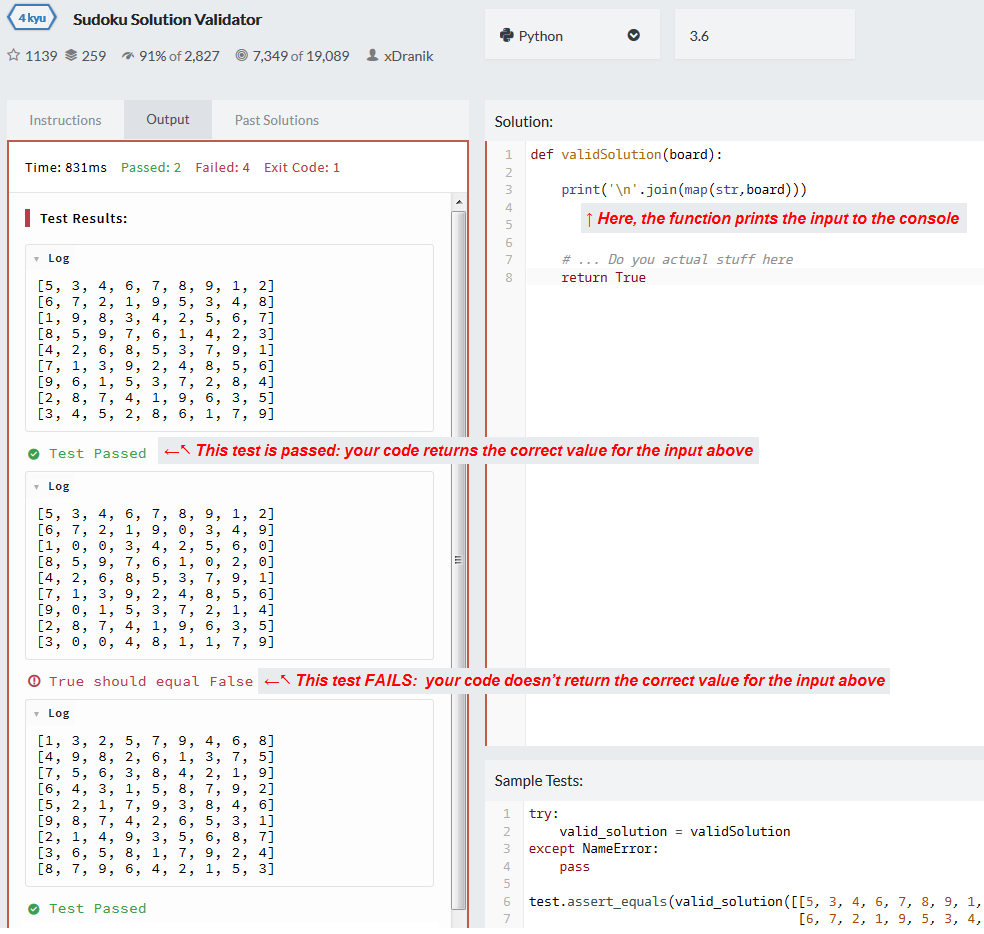 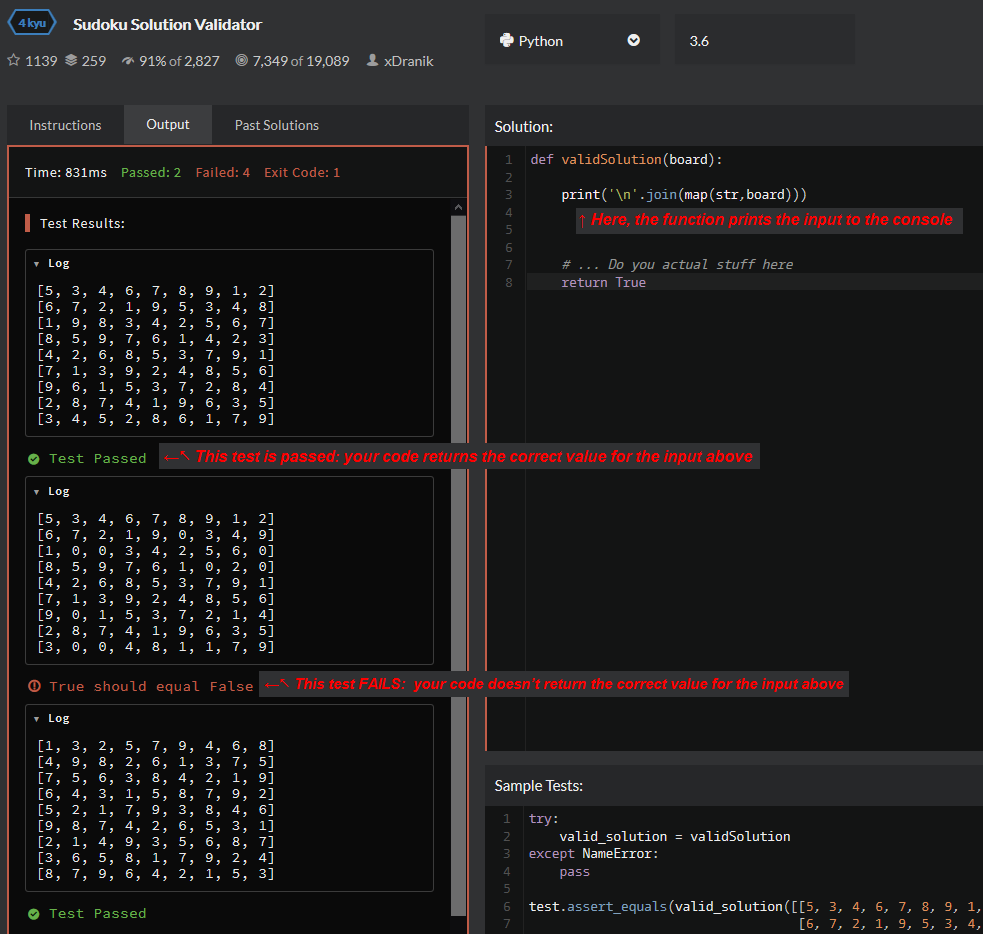 I want to print something to the console but it's not showing up!​

Sometimes the test suite crashes or is forcibly aborted by the test runner, and in such cases the output you want to print does not appear or is truncated. It usually happens because standard output was not flushed when the crash occurred. Make sure that stdout is flushed after each of your write operations, so you won’t lose any part of it.

Tests fail and assertion messages are confusing and unhelpful​

This question often applies to C and C++ kata, but not exclusively. Some test or assertion libraries used by Codewars do not have a nice way to specify additional assertion messages for failed test cases, or authors did not think or care about adding these. If this is the case you will unfortunately have to debug the kata in another way (for example by printing test input), and perhaps raise an issue about confusing assertion messages.

When the tests crash or don't complete​

I get Execution Timeout. Why?​

There are a few possible causes:

Sometimes, you see all the tests green, 0 failed tests, and then "exit code 137" in red at the top of the output panel.
If you see "STDERR, Max Buffer Size Reached (1.5 MiB)" at the bottom of it, that means too many things were printed to the console during the tests and they were interrupted.

Several things may cause this:

In any case, to bypass that problem, you need to reduce the statements from printing to the console in your code.

Note: this buffer error can actually become useful in some cases. See "I get Execution Timeout. Why?" just above.

I get Exit code: some number, or a message about some strange signal with some number​

It usually means that the test run either crashed, or was forcibly terminated by the runner. Unfortunately, it's not always easy to exactly tell why, because exit codes are often cryptic, differ between languages and test frameworks, and they usually are not very clear by themselves. However, in the majority of cases, the crash is caused by an invalid solution and should stop occurring when you fix it. Appendix A collects some often encountered error codes, but is by no means exhaustive. If you cannot find the problem in your solution and tests still crash, ask a question (see here).

This happens when your code is consuming all the memory the runner/docker allowed it to use during the tests. It's pretty inconvenient when this happens because it just crashes the sandbox in which your code is executed and ends up giving you no feedback at all.
Facing this error means either that your code ran into an infinite loop where it created too many objects/data structures, or that the kata is really heavy about the amount of data produced and you need to further micro-optimize the way you handle it. In any case, that means you need to change your approach (at least) a bit to solve the problem.

In some languages (Python, Ruby, ...), you can instead get this message: Response received but no data was written to STDOUT or STDERR if you're running the example tests while they are empty of any assertion (hence, when they actually weren't written by the author. You may encounter the case on old Kata from time to time). So check the presence of sample tests first, before you begin to rewrite your whole code... ;) And keep in mind you still can use the full test suite to debug your code, using Attempt.

I think there is a bug in the kata and/or its tests. What should I do?​

Probably nothing. Go through the following checklist and see which applies to you:

I am stuck. I tried everything and nothing helped. What now?​

You can ask for help on the Codewars Discord server in #help-solve channel. There’s always someone hanging out there, and usually users are very willing to help.

Appendix A: Exit codes, signals, and other strange numbers​

SIGSEGV is usually raised when a program accesses a memory location in an invalid way. Language standard defines such memory access as undefined behavior which means that such invalid code may or may not manifest in one way or another. It's not guaranteed that invalid memory access will always raise SIGSEGV. If you encounter such a signal when solving a kata, it means that your solution contains some error related to memory access. The signal itself does not necessarily have to be emitted directly by your solution. It can originate from the test suite if your solution returned a pointer that the test suite cannot reliably operate on. But still, it's probably some bug in your solution that causes the error. Many possible causes can lead to SIGSEGV, and in kata these usually are:

SIGABRT means that your solution destroyed internal structures of your program or its runtime, or damaged them in some way. Just like with SIGSEGV, there are many possible reasons for SIGABRT, but when it comes to kata, the most common are:

On Codewars, this error was usually seen when a solution attempted to dereference a past-the-end iterator, usually returned by end( ) or by some function which signals some negative outcome by returning end iterator (for example, std::find(myvec.begin(), myvec.end(), someValue) will return myvec.end() if value is not found).

Exit code 137 usually means that too much output was printed to the console. You can find more details on this problem here.